This tutorial will explain the use of PatScan patterns using biologically relevant examples. If you want to follow along, download the input files for example 1 and example 2.

Besides its catalytic function in the TCA cycle, the Aconitase enzyme has an important regulatory function in both Eukaryotes and Prokaryotes. When active as a regulator, Aconitase binds specific structural motifs in mRNA, so-called Iron-Response Elements (IREs). In Eukaryotes, it is highly sensitive to iron deprivation and oxidative stress. In bacteria, the role of Aconitase seems to be similar, though the recognition sequence is less preserved. Aconitase recognises the RNA stem loop structure of the IRE consisting of a C bulge, a stem of 6 amino acids, and a loop of 5 or 6 nucleotides. In Eukaryotes, the loop sequence always is CAGUG, in Bacteria, more variations are possible.
In this example, we will build a set of patterns to identify putative IREs in the 5’ UTR sequences of the bacterium Streptomyces coelicolor. First starting with a relatively basic example, we will slowly extend it to cover more advanced patterns and use cases.

The basic IRE pattern is CN1N2N3N4N5N6CAGUGN'6N'5N'4N'3N'2N'1, where Nx is any nucleotide, and N'x is its complement. An initial attempt at finding such a pattern using PatScan would use a number of string patterns and a complement pattern. Just using a string pattern with CNNNNNNCAGUGNNNNNN would fail to ensure the second set of Ns would be the reverse complement of the first, so instead we need to break the pattern up a bit.

On the start page , hit the "Browse" button to upload the example1_input.fa file.

Fig 1: Start page.
You will end up on an empty pattern input screen.

Fig 2: Empty pattern input screen.
In order to add patterns, we use the pattern selector, as shown in Fig. 3. Patterns can be added to the work area by dragging them from the selector, or simply by clicking on them. If you need to rearrange patterns, you can simply move them around using drag and drop in the work area. 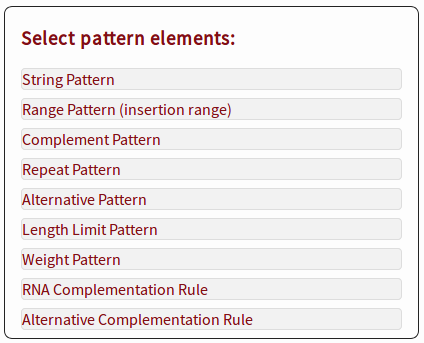 If we run the pattern we created in Example 1.1, we unfortunately don't get any hits in the input data. The reason for this is that the IRE motif in Bacteria is not as conserved. Notably, the stem region does not need to have six perfect matches. To allow for a mismatch in the stem, hit the "Variations" button on the complement pattern. A number of new fields appear allowing us to specify how many mismatches, insertions or deletions this pattern can tolerate. Put a "1" in the "mismatches" field and ignore the other fields to just allow a single mismatch.

Fig 6: The loop range pattern in place.
Another variation that is common on bacterial IREs is that the stem of the stem loop structure is only five bases long, not six. We can use another range pattern to support this. Hit the "Remove" button on the NNNNNN string pattern, and drag another range pattern into the same location instead. Remember to hit the "unnamed" button again so it says "p1" as before. You also need to select that from the "Complement of" dropdown of the complement pattern again.

Fig 7: Replacing the N string pattern with a range pattern.

If we wanted to explore further alternatives to the loop pattern sequence, we could put alternative patterns into alternative patterns to create a deeper logical branching. That approach does get a bit unwieldy, though. A better option is to instead use a weight pattern. A weight pattern is a kind of position-specific probability matrix that includes a cut-off value.
Weights can be added by clicking the "Add Weight" button. Every weight expects the probability values in percent for encountering a specific base at a given position. If the probability is zero, no value needs to be entered. The final weight is the summed-up probabilities of the whole sequence.
If we wanted to build a weight pattern to capture the loop sequences CAGUG and GAGAG but also want to allow for a G base in the fourth position, we would use the following approach:
First, remove the old alternative pattern by clicking its "Remove" button. Then, drag and drop a weight pattern in that place instead. Hit the "Add weight" button five times to add weights for all positions of our desired loop sequence. We want the first base to be C or G, so in the first column, we fill in "50" in the second and third rows. Zeroes can be left out, so no need to fill out the other rows. The second base should always be an A, so we put "100" into the first row of the second column and leave the rest blank. The third base should always be a G, so "100" goes into the third row of the third column. The fourth base could be A, G, or T (actually U, but for weight matrices those bases are equivalent). The weights are a bit arbitrary for this one, as long as C gets a zero. As there is no published evidence for G actualy being valid, I personally like to score this a bit less than the experimentally validated options. So, for column four, let's put "40" into the first and last rows, and "20" into the third row. For the last base, we again always want a G, so the fifth column gets a "100" in the third row.
To calculate the weight cut-off, we use the minimal score a valid pattern can obtain. There are three bases at "100", one base at "50" and one where the lowest valid score is "20", so "370" is the minimum score we expect a good pattern to hit.

Cytochrome P450 proteins utilise heme cofactors to perform oxidation reactions and are found all over the tree of life. The heme cofactor binds to a cysteine in the active site of the enzyme. In this example, we will build a set of patterns to identify the active site cysteine of cytochrome P450 enzymes found in the proteome of the bacterium Streptomyces coelicolor. We assume that you have already gone over example 1 and are familiar with the basic pattern creation.

According to the PROSITE database entry PS00086, the pattern for identifying the active site cysteine is [FW]-[SGNH]-x-[GD]-{F}-[RKHPT]-{P}-C-[LIVMFAP]-[GAD]. If you are not familiar with the PROSITE pattern notation, amino acid letters wrapped in square brackets ([ ]) are alternatives, amino acid letters wrapped by curly braces ({ }) should not be present at a given position, and x means any arbirary amino acid.

PatScan has two protein-specific patterns that allow us to search for patterns like this. The any-of pattern allows to specify a list of alternatives, matching the square brackets ([ ]) in the PROSITE format. The not-any-of pattern allows to give a list of amino acids that should not be present, matching the curly braces ({ }) in the PROSITE format. Note that both the any-of and the not-any-of pattern don't take a location but instead need to be inserted into your overall pattern at the location where you want to allow/disallow multiple amino acids. So if you wanted to match the sequences MAGICHAT and MAGICCAT, you want to allow for both H and C at position 6 in the sequence. In order to build this pattern in PatScan, you need to break it up into three parts. You need a string pattern for MAGIC, an any-of pattern for CH and another string pattern for AT, as shown in figure 11. The PROSITE pattern for this would be MAGIC-[CH]-AT, so you can usually use the dashes (-) in the PROSITE pattern to figure out where you need differnt pattern elements. 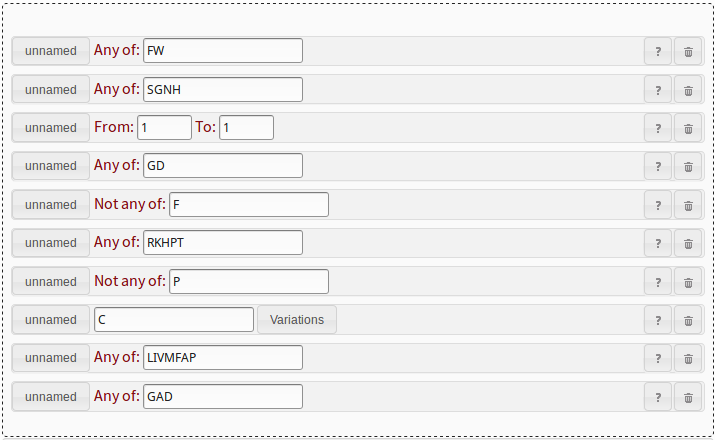